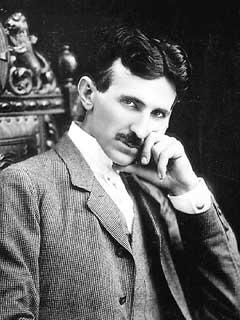 In 1884, Tesla came to the US and began working for Thomas Edison. While Edison was a good inventor/businessman, Tesla was a truly great Electrical Engineer/Scientist. This distinction is why he won the “War of Currents” against Edison in later years. Wikipedia has an excellent biography with many references and links. In 1960 the SI derived unit of magnetic flux density was named the tesla in his honor.